In much earlier times, horns were very basic instruments indeed being little more than brass tubes wound a few times and having a flared opening. These early types of horn were frequently used on hunts for calling in the dogs has of course the tone is produced could be heard over much further distance than the human voice.

These early horns would be commonly found pitch in various keys to the example in the keys of E, E flat, F, B flat, and C. Owing to reasons explained in more detail in our introductory horn section, the only notes available to the player were those based on the harmonic series of the single note and accordingly the only way that the player could claim different key structures was to insert extra lengths of tubing and these were known as ‘crooks. When the player inserted one of these crooks, it would alter the tube length of the instrument, and accordingly the pitch of the instrument. 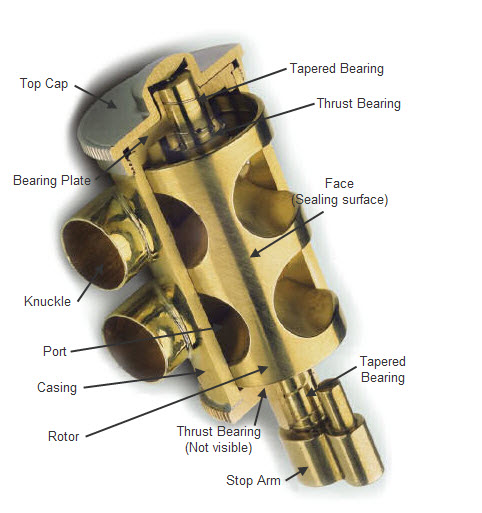 In the early 19th century, the use of firstly pistons then later rotary valves (right) was developed. At first the main value of this was of course to get away from the clumsy practice of having to change crooks during the music. However more than this, this use of different types of valves offered a much greater degree of flexibility when playing in different keys and the full use of valves made the horn capable of producing the fall chromatic scale for the first time. This greater flexibility was very soon of course reflected in the works that composers created for the horn which no longer had to be limited to the fundamental notes of the harmonic series and allowed the horn player to play more emotively and utilise chromatic passages. Some horn players however still prefer to use a natural horn especially when playing in the kind of ensemble wishing to recreate original old styles.

By the end of the 19th century and additional practice was well established whereby a player would insert his right hand into the bell of the horn in order to change the pitch of the notes by as much as a full tone and of course today this gives even greater control of his instrument to the horn player.