The trombone is made up of a cylindrical tube shaped into a complex series of tapers, the narrowest near the mouthpiece and the widest towards the bell, (before the flare of the bell starts). The strongest characteristic of the trombone is that it has a telescopic slide by which the trombone player is able to vary the length of the tube and alter the pitch of the notes he or she produces. Like the trumpet, the trombone has a detachable cup-shaped mouthpiece.

In the context of the wind instruments found in the orchestra, the trombones are exceptional in that they have two members of their family which are equally standard: that is to say that tenor trombone pitched in B-flat and the bass trombone. In orchestral scores, the trombone is often denoted using the German word: “Posaune” which actually helps greatly in locating the instrument on the page. 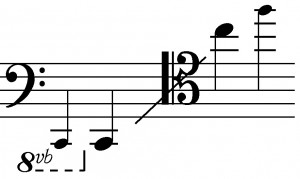 This instrument is pitched in B-flat and is non transposing. With the tenor trombone, different pitches are obtained by varying the length of the vibrating air column by the use of a movable slide, the position of which can be altered by the trombone player. There are seven positions each of which gives a player a different series of notes logically based on the harmonic series. The range of the tenor trombone in B-flat is shown on the right. When writing for the B-flat tenor trombone, the bass clef is normally used with the tenor clef being used for the highest part of the range.

The bass trombone normally appears in a symphony orchestra in the form of the tenor-bass B-flat/F. instrument. The G. trombone which used to be commonly used is now hardly ever found.