On 24 November 1836, Wagner and Minna were married. It is said that the pair were quarrelling even in the presence of the clergyman who was to marry them. Their life together was not a calm one. Wagner could not easily tolerate the many admirers attracted by Minna’s regular stage appearances. As much as he was jealous of her, she in turn could never stand his extravagances and needs for his creature comforts, costly furnishings, and more than anything else, clothes. His love of fine silks and velvets which he claimed he needed to achieve inspiration is legendary. The extent of Wagner’s extravagance can be seen from this order for a dressing gown: ‘Pink satin stuffed with eiderdown and quilted in squares . . . lined with white satin, six widths at the bottom … a padded ruching all round’. 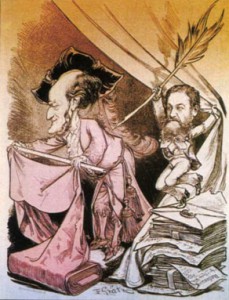 Because of Wagner’s unbridled extravagances, the debts inevitably piled up and Minna could stand it no longer. As Wagner was summoned to appear before the magistrate to answer the charges of his creditors, she eloped with a businessman called Dietrich. Wagner caught up with her at her parents’ home in Dresden, but after a short reconciliation, she soon disappeared again.

A caricature of Wagner (right) from Der Floh (The Flea). This was published soon after Wagner’s letters to his milliner had revealed his love for velvets, satins and other costly fabrics. Wagner’s excesses led to financial problems all his life.

Minna did eventually write ‘a really moving letter’ to her husband, and after more than four months separation, she joined Wagner at Riga where he had taken up a new position as theatre director.

Exhausted by their emotional trials and tribulations, they spent a much more peaceful time together until, in 1829, Wagner fell foul of his employers and was fired from his job.

Next: Wagner in Paris