The relationship of Wagner with Cosima caused much enmity in court circles which was both provoked and aggravated by Wagner’s extravagant lifestyle and high-handed attitude. He was seen as an evil influence upon the young King and some went as far as to say that their friendship was of a homosexual nature although this has never been proven. (Right: Cosima Wagner)

After a published attack by Wagner upon the cabinet, his enemies were given the opportunity to convince King Ludwig that there was a danger of an uprising and Ludwig had no option but to banish Wagner from his kingdom. Once again, Richard Wagner gathered his belongings and left for Switzerland where sadly he soon received the news of Minna’s death. 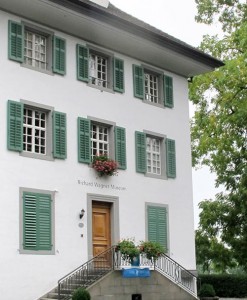 With Cosima’s help, he managed to find a beautiful white villa overlooking the Lake Lucerne (Triebschen, photo left). Here he would have the peace and tranquillity which he so much needed to continue his music composition.

On the 25th of August 1870, Wagner and Cosima were married and there followed a few happy years during which Wagner completed much of Siegfried and Götterdämmerung and passed many peaceful evenings dictating his memoirs to his wife. His happiness at this time can most clearly be heard in the beautiful Siegfried Idyll which he composed for Cosima and organised a small orchestra to play on the staircase outside her bedroom.

Next: Bayreuth & the Final Years