After Geyer’s death, Wagner was sent to live with his elder brother, Julius, who was apprenticed to a goldsmith. After a year there, he returned to Dresden, once again flinging himself into its theatrical atmosphere. At this time, he staged highly imaginative puppet shows of the plays he saw performed there. In terms of his schooling, the only subject that really was of any interest to Wagner was Greek tragedy, although he found Greek grammar boring!. One thing that is clear however is that at this time he began to display gift for verse and indeed, a poem he wrote to commemorate the death of a school friend was chosen to be recited and published. Also very importantly at this time as he moved into late adolescence, the seeds of his later career had been planted through exposure to the musical works of Mozart and Beethoven. 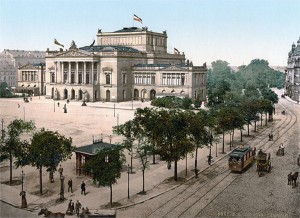 In 1830, Richard Wagner gravitated to Leipzig, where he so much liked the idea of student life that he determined to enter the university. It is typical of Wagner’s arrogance that he did not enrol in the usual way through the Registrar, but chose to go straight to see the Rector and to convince him of his worth! Upon enrolment, Wagner threw himself wholeheartedly into the dissolute student life that had been the main attraction of Leipzig. He determined to live that life to the hilt – even to the extent of duelling – it is said that he was only too happy to challenge other students to a duel but fortunately for the future of his art, he never actually had to fight any of the duels to which he so readily challenged his opponents.

Wagner later related in ‘Mein Leben’ that he was extremely lucky, having challenged a famous swordsman called Tischer. Luckily for him, he (Wagner) arrived for the contest at break of day, but Tischer had been so badly beaten up in a drunken brawl at the local brothel the night before that he could not face his challenger.

Wagner also developed a penchant for gambling and this soon took precedence over his other vices! He even apparently at one point gambled away the monthly pension he had collected to send to his mother!