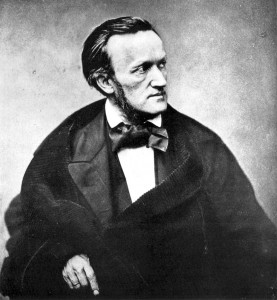 Wagner’s lack of co-operation in the preparation of the Rheingold premiere persisted with the Walküre premiere of 26 June 1870. This meant that hornists had to play the tuba parts on existing brass instruments (the bugle horn).
However, Wagner had written to Hans Richter in May 1870 regarding the little tubas and ‘arranging the extra brass’ for the Rheingold score. In the published score (printed 20 March 1873) – for which Wagner received assistance from an unknown copyist on eleven pages of 4-part tuba incipits – there is a preface where Wagner officially introduces the new quartet of tubas. (Left: Wagner in 1861)

Of the eight horns, four alternate on tubas. Of these tubas, two are tenor and in B-flat, and two are bass and in F. They are to be played by the third and fourth pairs of hornists, numbers five through eight, the tenor tubas by players five and seven, and the bass tubas by players six and eight. Players six and seven typically exchange seats so that the arrangement is two tenor tubas alongside two bass tubas.

In the score of Die Walküre, however, the tenor tubas are written in E-flat and the bass tubas in B-flat in an attempt to cater to the band instruments that first played the parts and also to the limitations of the players: the parts were thus considered more comfortable for reading. However, the keys of B-flat and F were to be retained in copying the orchestral parts and the music had to be transposed into these keys.

This was the start of the tangled issue of transpositions in writing for the Wagner tuba. Wagner, however, had a change of heart and the parts were not transposed but notated exactly as they had been written in the autograph manuscript. Was this simply indecision on his part or an uncertainty as to the employment and transposition of the new instruments? Wagner evidently preferred E-flat/B-flat notation while Richter preferred B-flat/F notation.

This confusion is seen in the Ring’s final two operas: Siegfried adopts E-flat/B-flat notation, with a short but notable excursion into C for the second bass tuba; and Götterdammerung has the Prelude notated for tenors in B-flat and basses in F, whereas Acts 1-3 return to E-flat/B-flat notation. Wagner’s preference of notation, which looked to him like the pitches sounded, gained the upper hand, and many conflicting theories have been put forward to explain it. One solution from the very beginning was for players to write out the parts in their own chosen key, and this happens even to this day.