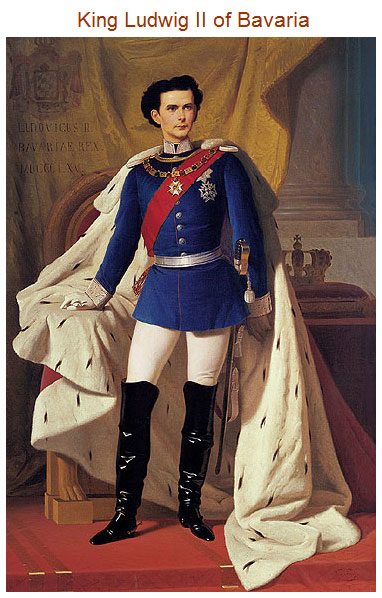 Although Wagner did have some critical success with Die Meistersinger von Nürnberg, and some paying concert tours abroad, his finances once again inevitably worsened. He was almost suicidal with despair when on 3 May 1864, he received a card from Herr Pflstermeister, secretary to King Ludwig II of Bavaria, requesting to see him. Not seeing any point to the visit, Wagner refused but Herr Pfistermeister persisted, and when Wagner eventually agreed to meet, he realised that his salvation was at hand!

The young, handsome King Ludwig was truly besotted with Wagner’s music and wanted to become his patron. He offered to take all the financial burden away from Wagner leaving him free to create his art in an ideal atmosphere. To this end, King Ludwig installed Wagner in a beautiful villa close to the royal castle of Hohenschwangau.

At this time, Wagner’s happiness was further enhanced by a meeting with a lady who was to become the third and last great love of his life. Ludwig requested the presence of the conductor and piano virtuoso Hans von Bülow and his wife Cosima, who was in fact Franz Liszt’s illegitimate daughter born out of wedlock, at Como, Italy, to the Countess Marie d’Agoult, a longtime mistress of Liszt. The idea was that the pair would help Wagner in all his musical activities. Both were keen admirers of Wagner’s music, and incredibly, when Cosima and Wagner fell in love, Hans was prepared to sacrifice his unhappy marriage to the greater glory of Wagner’s music.

Next: Wagner and Cosima