Eventually, having got the excesses of his student life out of his system, Wagner settled down to serious study and in February 1831 he began taking lessons in counterpoint from Theodor Weinlig, the cantor of St. Thomas’ church (a post once held by Johann Sebastian Bach). Soon he had composed a piano sonata, three orchestral overtures, and a symphony in C, all of which were successfully performed. 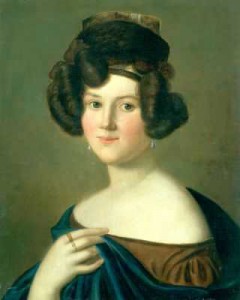 n 1833 he moved to Würzburg, where his brother Albert had managed to procure for him the post of chorus master. His time there gave him valuable experience of theatre production, and led to him being offered a directorship of the Magdeburg theatre company. Wagner joined the company at Bad Lauchstädt, a sleepy spa town where the company was having its summer season. At first, Wagner was not keen on the place but this opinion was soon overturned when he met Minna Planer, (right) the leading juvenile actress. She made such an impression on him that he rented a room with all haste.

After the summer season, they both returned to Magdeburg, where Wagner took up his duties as a musical director. He was an intensely passionate, if unorthodox, conductor – he wrote: “I managed very quickly to acquire complete assurance in controlling the orchestra. It was not long before I became very popular with the players, and their excellent playing in certain energetic overtures, the end of which I took at an incredibly fast tempo, often roused the audience to deafening applause”.

Wagner’s experiences as a composer were however not happy ones at this time. The second performance of his opera Das Liebesverbot (Forbidden Love) was a fiasco. The husband of the leading lady apparently gave the tenor, with whom she was involved in an affair, a bloody nose only minutes before the curtain was due to rise. If the curtain had risen, it would have revealed the entire cast brawling on stage in something resembling a farce!

Next: Wagner’s Marriage to Minna Planer