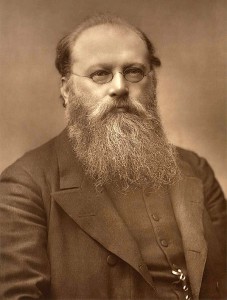 That hornist was Hans Richter (right), a gifted musician who played a variety of instruments. He was recommended to Wagner by the Viennese Kappelmeister Heinrich Esser. Wagner needed a competent copyist and Richter was engaged to work on Die Meistersinger von Nurnburg while still playing the horn.
Wagner’s patron, King Ludwig II, wanted Das Rheingold performed on his birthday in August 1869, but Wagner was less than enthusiastic about it and indeed unready for the event: there were still things to be sorted out, not least of which was procuring his small tubas.

Most of the extant literature on the Wagner tuba agrees that C.W. Moritz of Berlin manufactured the first instruments. Wagner had previously employed him, and a new set of Moritz tubas was acquired for Bayreuth in 1877. However, the first 1869-70 Munich performances of Rheingold and Walküre and the 1876 Bayreuth performances of Der Ring der Nibelungen used tubas from some other source, and the Moritz family never claimed responsibility for being that source.

Whatever the source, it is certain that the actual premiere of Das Rheingold on 22 September 1869 did not employ the new instruments. The performance had a difficult preparation in that the originally intended conductor, Hans von Bülow, stepped down when Wagner began to live with his wife, Cosima. Richter, who looked in line to take over, also resigned. The King searched for a new conductor and refused to reinstate Richter at Wagner’s request. Eventually, Franz Wüllner was taken on and resisted being warned off by Wagner.

There is no mention of Wagner tubas in Sebastian Roeckl’s listing of orchestral personnel, nor is there a record of the instruments or of musicians being additionally paid for playing them. Wüllner, for whom the Wagner tubas were not a priority, accepted many compromises to make the production viable, and the parts would have been given over to military instruments.

Next Essay – Trials and Transpositions