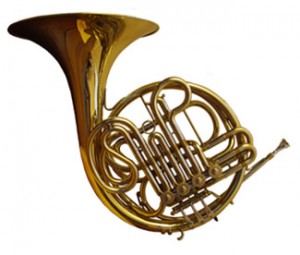 Although often referred to as the French horn, this fine instrument is probably more frequently manufactured today in Germany utilising rotary valves as opposed to the piston valves found in other brass instruments. However horns can still be found today in various areas of Europe utilising piston valves.

As stated in the overview of the brass section, the horns produce a very different and generally less brilliant tone than the heavier brass instruments such as the trumpet or trombone due to their having to a conical mouthpiece and bore as opposed to the cylindrical bore and cup shaped mouth piece of the trumpets trombones and tuba.

The duty of the horns is to work alongside both the woodwind section and the heavier brass section. The mechanism of the horn is as follows: a tone is produced by the action of the player using his lips (this is known as the embouchure) and generating wind pressure in the small conical mouthpiece. This sets the air within the instrument to vibrate and a tone is produced. By varying the embouchure, the player is able to produce the upper partials of the harmonic series based on a fundamental note – this being of course dependent on the length of the tube.

As the player will of course wish to produce notes which do not fall within the basic harmonic series, then valves are necessary which enable the addition of extra sections of tube and this of course varies the pitch. The chromatic scale can be produced in this way by using valves in combination or separately to produce numerous harmonic series.