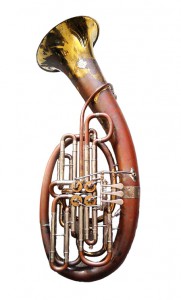 Stephen Caudel’s Edel Rhapsody for Wagner Tuba and small orchestra (1993) is the first and only work ever to feature the instrument in a solo role with orchestra.

Perhaps the most prolific composer for Wagner tuba is the Cuban George Lopez who composed a remarkable eleven works for Wagner tuba including ‘Gonzales the Earth Eater for Solo Wagner Tuba and Four Instruments’ (1996) and ‘Dome Park for 82 Instrumentalists’ (1993) which includes 8 Wagner tubas (four in B-flat and four in F).

From the sixties onwards the instrument reached Hollywood and even the Motown charts. The Wagner tuba was memorably used in Harry Nilsson’s ‘Everybody’s Talkin’, Mason Williams’ ‘Classical Gas’ and Mike Post’s ‘Rockford Files Theme’ – the latter two being honoured with musical awards. The Wagner tuba has been used creatively in both Jazz and motion film scores.

The general impression of the Wagner tuba that is still current is of an outdated museum piece, and it is often the butt of caricature. Many hornists also have a problematical relationship with the instrument and do not normally like to play them. The Wagner tuba has a negative reputation of being hard to play and having intonational difficulties, but this stems purely from unfamiliarity with the instrument which can be the result of infrequent usage.

Compensating double tubas were reintroduced in the 1960s, to be followed by full double tubas, yet these instruments have not been accepted without criticism.

Back to the Introduction