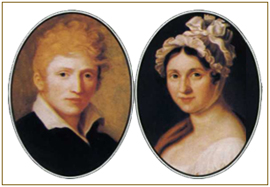 At this time a man named Ludwig Geyer entered the world of the widowed Johanna and her nine children which was fortuitous at this terribly difficult time. Geyer was a painter and actor who had been a lodger in the Wagner household for some years sharing Carl and Johanna’s interest in the theatre. Accordingly he was a very close friend of the family and many have put forward the idea that he was more than a friend to Johanna and possibly Wagner’s real father. Geyer was popular with all the children, and it seemed quite natural that after Carl’s death he should take over the role of the father. Geyer and Johanna married and moved to Dresden in 1814 settling into family life. Although young Richard showed no particular talent in any direction, Geyer was determined to make something of him. However the young Wagner did have a real enjoyment of the theatre and because of Geyer’s acting connections, he was given the opportunity to see theatrical life first-hand. This an exciting world which fascinated Wagner – he said it: ‘lifted him from the dull routine of daily life’

Geyer called the boy, his ‘little Cossack’, with his piercing blue eyes, excitable temperament, and a head that seemed too large for his short body. Apparently the young Richard had such a vivid imagination that it caused him nightmares and his sisters refused to sleep in the same room as him due to his screaming during his sleep. Secretly however, Geyer despaired of ever finding the boy a true vocation! He even tried to teach the boy to draw but this led to nothing.

One interesting point however is that when Geyer was on his deathbed, Wagner, aged eight, came to visit him and Johanna led Wagner to another room where there was a piano and she got him to play to amuse the dying man. Geyer is reported to have sat up in bed and exclaimed: ‘What if he has a talent for music?’After Geyer’s death, there began the frequent and unsettling changes of home that were to become so much a part of Wagner’s whole life.

Next: Wagner the Student