The trumpet in one form or another, dates back over 3000 years and was even found in the form of bronze and silver trumpets in Tutankhamen’s tomb in Egypt. Very often, these early trumpets would have been used as signalling devices either for religious or military purposes. This early tradition could be said to have been continued to date in the use of a bugle where different tunes would communicate different information.

Towards the late Middle Ages and the Renaissance, technical improvements in metalworking and instrument design in general lead to the trumpet in used in a more musical context and of course the “baroque era” is often referred to as the “Golden Age of the natural trumpet”.
In the classical and romantic periods, it could be said that the trumpet was relegated to a fairly secondary role by most of the major composers of the time possibly with the exception being the trumpet concerto of Haydn. This could be due to the fact that trumpet valves were only invented towards the middle of the 19th century. Indeed, crooks and shanks (removable tube of various lengths) were still in use during the first decades of the 20th century. 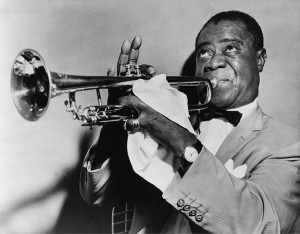 Today in the 21st century, the trumpet is used in virtually every form of music from classical to jazz rock blues and many others.

Great players of our age include: Louis Armstrong (Photo right), Miles Davis, Wynton Marsalis, Dizzy Gillespie and many many more.