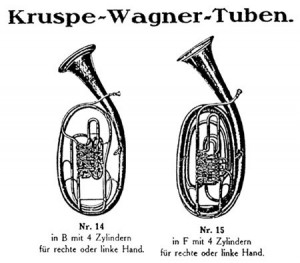 It is apparent that the Wagner tuba had a drawn-out conception, realization and first employment. In November 1874, however, Tuben were ordered in Munich. The very first Wagner tubas were made in 1874-75 by the Munich craftsman Georg Ottensteiner, who had been trained in Paris and offered his own line of Sax-type brass instruments.

The instrument was essentially a Cornon with a reduced bore size and four valves. It was still far from technically sound and the B-flat instrument was judged the easier to play. Articulation seemed to be a continual problem, and intonation was difficult to control.

The hornists who premiered the Wagner tubas on the first entire Ring cycle were Theodor Methfessel, Ernst Schmidt, Richard Dechandt and Karl Mullich. The instrument’s tone is such that it is able to personify Valhalla’s divine majesty, but also the sinister, subterranean world of Nibelheim.

In 1877 Moritz delivered a quartet of what he called ‘horn tubas’ and in 1890 Alexander delivered a definitive set to Bayreuth which would be played for years to come.

The latter were signally the first to market their instruments as Wagner tubas and their product would come to be the dominant Wagner tuba of the next century. Even so, there was heavy competition for the market.

For Wagner himself, the last appearance of the instrument occurred in Götterdammerung. Up to this point it had been confined to operatic scores, but after Wagner’s death it would make a notable entry into the symphonic literature.

Next Essay – The Disciple