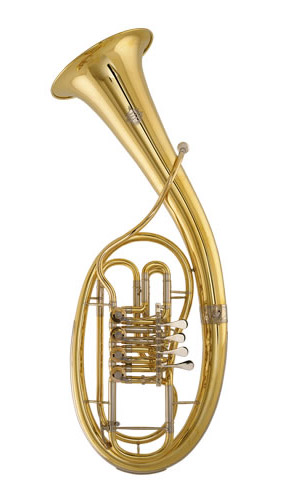 From its earliest beginnings as a musical instrument, the Wagner tuba has always been a little controversial. Even its name has been a source of confusion for although it contains the word tuba, this instrument is in fact a kind of horn. It uses the same mouthpiece as a horn and is played by traditional horn players. Its history and development have been subject to sketchy and often incorrect analyses, as have descriptions of the instrument’s qualities.

What can be said  however, is that its hybrid construction and limited repertoire often result in problems of intonation for the French horn player who doubles on the instrument, especially if they are a less than skilful player. The Wagner tuba’s tone, however, is rightly admired for its nobility and dignity, whilst its use and notation have always been a bit of a puzzle to prospective composers. The difficult issue of notational method has often led to confusion over transposition for the player. (Right: B-flat Wagner Tuba)

The Wagner tuba was conceived by Richard Wagner (1813-1883) in the summer of 1853 when he was exiled in Zurich. He was working on Das Rheingold and envisaged a quartet of instruments which he called Tuben. The opera’s Valhalla motif was initially intended for trombones but then changed to Tuben in the orchestral draft. Wagner probably had in mind the ancient Bronze age Nordic horn, or lur, when he designed the Wagner tuba. The aim was to bridge the gap in timbre between the horn and trombones, and so blend the sounds of the brass section more effectively. Being a smaller sized tuba it would also integrate the sound of the new bass tuba (created in 1835) with that of the horns. The quartet of Wagner tubas would also be able to function on their own as a choir.

Today the Wagner tuba is generally used as an alternate doubling instrument to the horn and played as part of a quartet, comprising a pair of tenor tubas (played by 5th and 6th horns) and a pair of bass tubas (played by 7th and 8th horns). Accordingly, it has long been a tradition that horn players rely upon their orchestra, music college or opera house to supply the necessary set of Wagner Tubas. That scenario, however, is changing … and fast!

Increasing numbers of horn players are now purchasing their very own Wagner tuba. Based on our research and our interaction with Wagner tuba players around the world, the key factors behind this dramatic change appear to be: