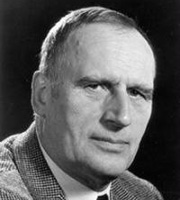 Jan Koetsier was born on August 14th 1911 in Amsterdam, Holland.

In his early years, he studied at the Musikhochschule in Berlin.

He was a conductor in Lübeck and Berlin before becaming assistant conductor of the Amsterdam Concertgebouw Orchestra in 1942. In 1950 he settled in West Germany.

He was conductor of the orchestra of the Bayerische Rundfunk up to 1966 and after that he was professor of conducting at the Musikhochschule in Munich, Bavaria.

Koetsier’s works are fairly often performed, his Third Symphony being performed in Philadelphia and New York. The composer has a special fondness towards brass music, due particularly to Philip Jones, the English trumpeter and longtime leader of the London Brass ensemble. A Brass symphony was commissioned by this famous Ensemble and this has been performed throughout Europe, the USA and Japan.

As far as we are aware, Koetsier’s only contribution to the Wagner Tuba reportoire is: