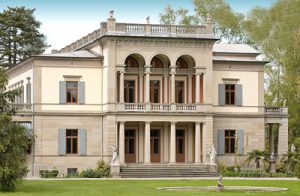 The love and hate relationship which Wagner and Minna enjoyed if that phrase can be used in this context, really reached a crisis point due to Wagner’s relationship with the second real love of his life: Mathilde Wesendonk (below right). Her husband, Otto was a wealthy Zurich banker (Photo right: Wesendonk Villa Zurich) who became a real champion of Wagner’s music -even providing the Wagners with the Asyl, a small villa next to the mansion he was having built in a fashionable suburb. In July 1856 Mathilde came to live next door and Wagner became first her teacher, and then her lover. Mathilde naturally soon became the source of even more domestic troubles and financial anxiety. 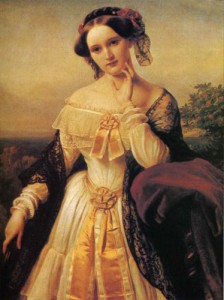 This love affair blossomed between July and September and inspired by their love, Wagner wrote the poem of Tristan and Isolde which he showed to her. Mathilde’s husband Otto did know of the affair but Minna did not and when she found out she became so upset that her already weak heart was affected and Wagner arranged for her to travel to Brastenberg for a cure. Minna confronted Mathilde before she left and Mathilde herself was in turn angry with Wagner for not being honest with his wife. Accordingly the affair soon ended.

The renunciation that Wagner had to make of his love was expressed in the second act of Tristan, completed by Wagner in Venice in 1889.

Next: King Ludwig II of Bavaria