My Journey With The Wagner Tuba – Molly Norcross

When we heard about Molly’s interest in the Wagner tuba we were keen to learn more about her love for the instrument. We knew that as a hornist she has received critical acclaim (hailed by Allan Kozinn of the New York times as “precise” and “passionate” in performance). But the Wagner tuba? So we asked her for her thoughts and she responded with delightful enthusiasm, as follows: 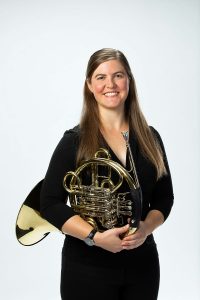 “My journey with the Wagner tuba started about fifteen years ago, my freshman year at The Juilliard School. I walked up to the bulletin board with orchestra assignments and saw the words “Wagner tuba” and “Molly Norcross” next to each other. The task: 7th horn and 1st Wagner tuba on Stravinsky’s Rite of Spring!

I had only been vaguely aware of the shadowy existence of this brass outlier until then, and it was critical that I become much more familiar, and very quickly. I had a blast learning the few lines of Wagner tuba music, and enjoyed discovering the quirks and charms of the instrument itself. I must confess that, to this day, the loudest, wrongest note I have ever played was in the dress rehearsal a few weeks later – the last note of the first part of the piece… it seemed to ring in the hall indefinitely!

In my following undergrad years I was assigned to play more Wagner tuba parts (György Kurtág’s Stélé and Richard Strauss’ famous Alpine Symphony). Each time I was able to increase the depth of my learning and appreciation for this unusual instrument. When planning my senior recital, I wanted it to be representative of all of the things that I had learned in the previous four years. It seemed only natural to me that the Wagner tuba be part of that recital, since I had somehow ended up playing it more frequently than anyone else at the school. Much of the orchestral Wagner tuba writing I had played during those four years was to depict stormy, aggressive, and primal feelings, and I knew that the tuba was capable of much more than thunder and brutality. So I decided to play two songs by Henri Duparc that I had found to be particularly beautiful; it was time for the Wagner tuba’s lyricism to shine.

Since then, I’ve had the opportunity to play the Wagner tuba professionally with some amazing orchestras (San Antonio Symphony, Cincinnati Symphony Orchestra, Dallas Symphony Orchestra) and in some exquisite repertoire (Alpine Symphony and the Rite of Spring).  I have also had the chance to play The Ring Without Words with music from Wagner’s Ring operas and Bruckner Symphonies 7 and 8.

Getting to play a full Ring Cycle is on my bucket list, not only because of the iconic horn calls that we all love to play, but because of the gorgeous Wagner tuba moments that illuminate not only Valhalla, but also the hearts of the audience.

I’m excited to bring the Wagner tuba into the solo spotlight once more in my recital for the Mid-South Horn Workshop 2020 (March 14 at 8:00pm). The event as a whole has a wealth of exhibitions, panel discussions, performances, masterclasses, and competitions.”

Molly’s recital at the event (designated Corno Con 2020) will include both French horn and Wagner tuba. Her performance on Wagner tuba will feature music by two different composers, one English, one French:

The recital is part of a three day, annual Horn Workshop event (March 13-15) hosted by the Wanda L. Bass School of Music at Oklahoma City University.