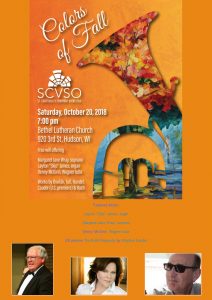 It is always exciting to share a special news story involving the Wagner tuba, especially when it concerns new music and special performances.

In previous articles we have covered how the world-famous Ocean Way studios played host to a set of 4 prized Wagner Tubas when they were used in a top video game music score. Then there was the fun video clip of members of the Auckland Philharmonia Orchestra playing Wagner tubas in a car on their way to the concert hall – bum notes, bumpy roads and all!

Today we are delighted to share the news of the US Premiere of Stephen Caudel’s Edel Rhapsody for solo Wagner tuba and Orchestra.

On October 20 this unique work will be featured in a special concert in Hudson, Wisconsin where Wagner tuba soloist Denny McGinn will be accompanied by the St Croix Valley Symphony Orchestra (SCVSO). The concert also features works by Dvorak, Handel and Bach.

We contacted Denny ahead of the concert and asked him to shed some light on the upcoming concert and how he developed a passion for the Wagner tuba.

Denny very kindly obliged and here is what he had to say:

“The first time that I ever heard the Wagner Tuba was on the radio when I was driving home from high school. It was a pop tune called “Classical Gas” by Mason Williams that was arranged by Mike Post. The recordings by the Los Angeles Horn Club gave a name to the sound that I heard on “Classical Gas”. I would occasionally come across references or recordings that would include Wagner Tubas, but was never able to get my hands on one.”

“It was a long time before I was able to actually see and play a Wagner Tuba. When I found out that there was an affordable instrument available I discovered that a member of the Twin Cities Horn Club owned one of the Chinese built Wagner Tubas. He let me try his out, and shortly after that I bought one for myself.”