Looking back at the many communications we have received over the years from Wagner tuba players, one thing becomes evident. The number of French horn players who take up the Wagner tuba is most definitely on the increase. This is great news, not least because it has a domino effect into other areas of music. 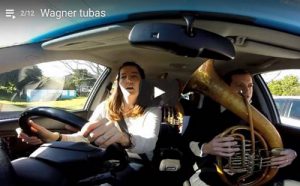 For example, there are now more published videos featuring the Wagner tuba than ever before. Granted, some are more light-hearted than others such as when players from the Auckland Philharmonia made a video in their car on the way to a concert! Read more about it on our Wagner tubas in the car special feature.

What shines through this and all the other video clips, however, is the sense of enthusiasm for the instrument. Most notably, we are now seeing more Wagner tuba players from world-famous orchestras featuring in uploaded videos.

Richard Sebring is associate principal horn of the Boston Symphony Orchestra and in this clip he delivers a nice, short introduction to the Wagner tuba. Entitled ‘Unexpected Instruments’, you then get to see part of a superb performance by the BSO.

The London Philharmonic’s performance of Die Walküre last year of course featured a quartet of Wagner tubas. This clip is from rehearsals where one of the players explains a little about the instrument. Have a listen then read our own description on our Wagner tuba introduction  page. Well, they do say great minds think alike!

Hopefully, we will see more and more top horn players featuring in videos like these. They don’t have to be long clips, just interesting – and INTEREST is definitely what the Wagner tuba brings to brass music!