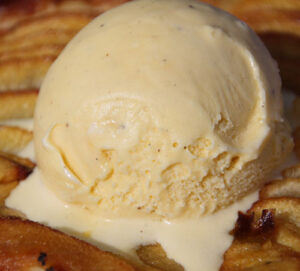 What does ice cream have in common with opera? Well, add a few sandbags into the equation and you have a fascinating story from a top international hornist!

Before we get to the specifics, here’s a little background. We love to share orchestral performance news, especially when it relates to horn and Wagner tuba players and last year the dearth of live concerts presented quite a challenge in that respect! However, the challenge quickly turned into an opportunity and we were lucky enough to have some notable hornists share their stories of how the pandemic had impacted their lives and what they were doing in place of concert performance.

Amongst them was top US hornist and Wagner tuba enthusiast Molly Norcross, Associate Principal Horn with the Cincinnati Symphony Orchestra. In August 2020 we learned how making videos and participating in an online Horn masterclass had created a new space in Molly’s musical life. Then in October Molly was once again on the concert platform with the Cincinnati Symphony returning to live performance, albeit with some strange but necessary new safety protocols! Nine months later we are enjoying a summer of fewer restrictions and we wondered what Molly’s current musical focus might be. So, we invited her to share that news with us and we are delighted to publish what she had to say.

“For many musicians returning to work, we are seeing much more of the great outdoors than we would during a typical season. The Cincinnati Symphony musicians playing for the Cincinnati Opera productions this summer are no exception. Rather than appearing in our usual home, Music Hall, the opera season this year is being held at Summit Park. Performance patrons are spread out in a large grassy area – they look quite cosy with lawn chairs and blankets, the sprinkling of fireflies and occasional interruptions from a couple of late emerging cicadas.

The semi-staged productions this summer include a rotating offering of Carmen, Tosca, and The Barber of Seville, all with reduced orchestras.

I am playing for Carmen (sadly no Wagner tuba involved!), and it is such a pleasure to see members of the Cincinnati Ballet performing during orchestral interludes, to be surrounded by the Cincinnati Opera Chorus stationed at both sides of the stage, and to hear the amazing headlining singers J’Nai Bridges, Stephen Costello, Christian Pursell, and Janai Brugger. 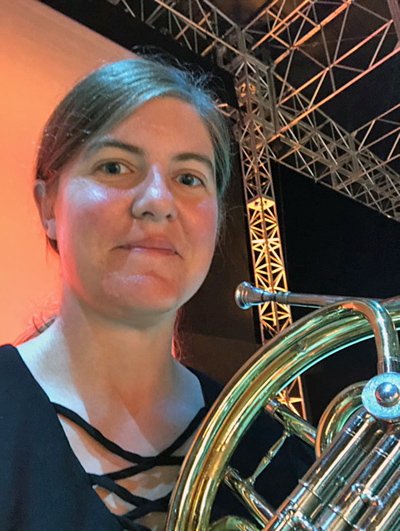 Rehearsing and performing outside has its array of challenges and safety issues, from music stands needing to be weighed down with sandbags, to getting very speedy with turning pages and moving wind clips, and protocols for lightning delays and plans for other inclement weather.

On a couple of occasions my colleagues and I have been watching weather radar very closely! We have been lucky so far with just one delayed and one cancelled rehearsal due to the weather.

The sound team is working in high gear to mic and mix the orchestra and singers and feed that sound to the park and the onstage monitors, in conjunction with video feeds of the conductor for the singers, and the singers for the audience, plus subtitles – there is a lot going on!

So we say a huge thank you to all the production crew members, personnel managers, librarians, arrangers, and all the symphony, opera and park staff who have been hard at work to make this opera season possible!

Enjoy Ice Cream And Support The Arts In Cincinnati

Like many people, I love ice cream, especially in the summer and July of course is National Ice Cream Month here in the US. So I was excited to hear that in Cincinnati you can buy a musical-themed, Limited Edition ice cream dish whilst supporting the Arts at the same time.

Graeter’s Ice Cream (which has been making ice cream since 1870!) supports many charitable causes in the community and they have come together with Rookwood Pottery artist Gary Simon and the Cincinnati Pops Orchestra to create this very special ice cream dish. A portion of the proceeds will be donated to the Cincinnati Pops Orchestra. More details here. 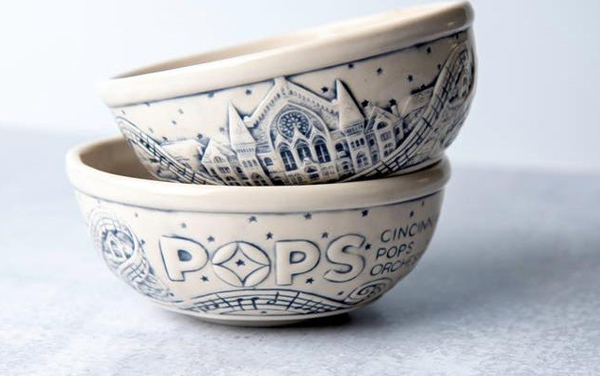 Combining people’s love of ice cream with the growing need for supporting The Arts is a marvellous idea and it would be great to see it done again. Perhaps next time they might put a horn and Wagner tuba on one! Now there’s an idea.” 🙂